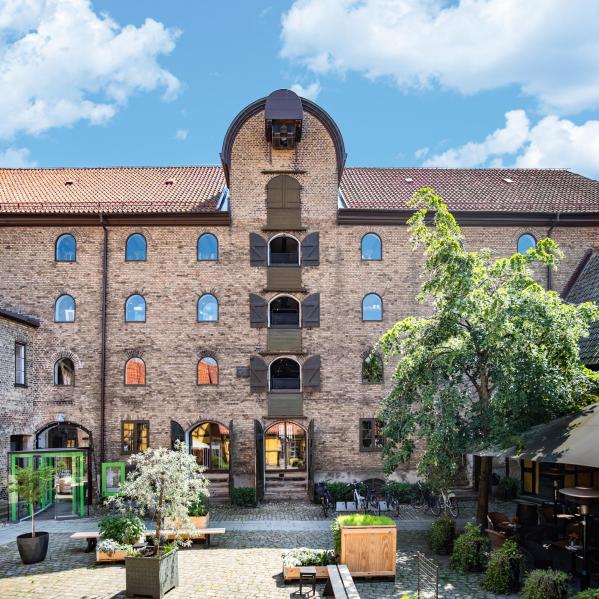 THE HISTORY OF FORM/DESIGN CENTER

“The timing could not have been better. When Form opened on Stadiongatan in Malmö in 1964 there was a great longing for a permanent address for contemporary modern design. A forum where the public could meet with designers and manufacturers to discuss issues of form, function and quality.”

So described design journalist Hedvig Hedqvist the start of Form/Design Center, an activity that was initiated by enthusiast Annika Heijkenskjöld. Together with the young interior designers and furniture designers Börge Lindau and Bo Lindekrantz, advertising executive John Melin and not least Regina Ivarsson, who would become Annika’s fellow enthusiast, she made her mark on and built up a generous and lively platform of activities. One that stubbornly and inquisitively keeps on going, year in and year out.

In the national policy set out in both 2003 and 2015, Form/Design Center was singled out as a national model and a proposed regional/national node in its subject field. One reason for this could certainly be that, as Malmö’s former cultural director Bengt Hall expressed it: “Form/Design Center stands with its feet in the soil of Skåne with its gaze fixed on the world, the future and visions.”

Some other notable events over the years:

It was time to move up out of the basement on Stadiongatan and into the city center. The new location, a former granary, provided new conditions for developing the operation and not least to get closer to the Center’s public.

Form/Design Center via Annika Heijkenskjöld was an important actor in the major exhibition NordForm 90 in today’s Västra Hamnen district. With NordForm 90 Annika passed on her mandate and the new director, Thomas Hellqvist, who was an architect, expanded the Center’s activities to include the field of architecture. Since then it has been a self-evident part of Form/Design Center’s activities.

Form/Design Center celebrated its anniversary by giving the building a facelift and a better work environment. With a careful yet firm hand, the architectural firm Wingårdhs Arkitekter generously contributed its expertise to give the granary, with its designated heritage status, a more open, inviting and bold look. The Society for the Preservation of Cultural Heritage and Green Parks in Malmö and the foundation Sparbanksstiftelsen Skåne helped with the implementation. Many thanks!

HISTORY OF SVENSK FORM/THE SWEDISH SOCIETY OF CRAFTS AND DESIGN

The world’s oldest design organisation – that is often the description given to Svensk Form (the Swedish Society of Crafts and Design), which until 1976 was called Svenska Slöjdföreningen (the Swedish Craft Association). In 1845, when the association was created, the Swedish word “slöjd” meant production in very general terms. Why was an association needed for that?

At the beginning of the 19th century the pace of industrialisation accelerated in Sweden. The import of textiles and other goods from the UK also increased. More and more goods were being industrially manufactured in factories.

Up until the 19th century, the production of goods in cities was reserved for various craft guilds, which used strict regulations to decide the number of workshops with masters, journeymen and apprentices in each city. A high level of craft skills was fostered. The development of industry was opposed by the conservative guild system, leading to a catastrophic lowering of Swedish workers’ craftsmanship and the increased import of foreign industrial goods of dubious quality.

In the run-up to the dissolution of the guild system in 1846, Nils Månsson Mandelgren realised that it was necessary to safeguard Swedish craft skills. Two years before that date he founded a Sunday school for artisans (Söndagsritskola för hantverkare). To support the school, an association called Svenska Slöjdföreningen (the Swedish Craft Association, now called Svensk Form/The Swedish Society of Crafts and Design) was founded on 6 October 1845. The school, now Konstfack University College of Arts, Crafts and Design, was run by the association until 1860, when the Swedish state took over.

Right from the very start Svensk Form worked actively as an opinion maker. The society took on more tasks, such as organising Sweden’s participation in international exhibition contexts, publishing free pattern sheets for artisans around the country, issuing information texts about production, supporting young artisans and designers with scholarships, opening a museum with educational objects organised by historical styles (which was later handed over to the National Museum), and founding a magazine in 1905, which in 1932 was given the name of Form Magazine.

Today Svensk Form has 13 regional associations in the entire country. Svensk Form Syd, which was founded in 1944, runs Form/Design Center and its operations.

Svensk Form is mandated by the Swedish government to promote Swedish design, both at home and abroad. Svensk Form works to encourage involvement and highlight the possibilities that design can give to the individual, culture, society and industry.

You can find out more about the history of Svensk Form here»
http://svenskform.se/en/about-svensk-form/history/

The western part of this property (now the Pehr Malmros building) was owned in 1539 by a Mr Steen Bilde and was later donated to the Heiliggeisthus hospital. It sold the building 20 years later to Niels Hammer, who owned the next-door property. In 1597 he commissioned the construction of the half-timbered building that today bears his name. It is regarded as being the country’s best-preserved half-timbered building from the end of the 16th century.

When Hammer’s son-in-law inherited the property in 1615 it was named “Jens Ennersen’s new house”. In 1725 Diedrich Sölscher, a merchant from Lübeck, purchased all the parts of the present Hedmanska gården property. It was called Södergård when his son-in-law Haqvin Bager inherited it in 1744 and ran a successful trading business. Haqvin Bager was an eccentric Malmö figure with a liking for regeneration and change.

The small granary (Diedrich Sölscher’s storehouse) was rebuilt by him into what was for Malmö an unusual half-timbered construction with a double kiln (grain dryer), which was found in 1980 during the restoration.

In 1803 two of the smaller buildings of the western part of the property were rebuilt and the Empire-style façade was constructed facing Lilla Torg. This building was described as Pehr Malmros’s “recently built residence”. The large rear extension on Niels Hammer’s house, so typical for Malmö merchants’ homes, was built in 1822 by Gustav Bark.

Ten years later the property came into the ownership of Gabriel Hedman and thereafter continued to be named after its last merchant owner. When the grain trade flourished in Malmö in the mid-19th century, Hedman had the high granary building constructed.

In 1894 his son-in-law Harald Bager built the storehouse that forms the east side of the courtyard. The new brick buildings replaced older half-timbered buildings in the same place. In the mid-20th century small companies and shops hired the Hedmanska gården buildings until the Municipality of Malmö acquired the property in 1967. That was how this valuable historical merchant’s house in Malmö was saved for future generations.

In 1974 the large brick granary was rebuilt to create suitable exhibition premises for Form/Design Center. The smaller buildings around the courtyard were restored in 1979–1982, revealing valuable interiors and decorative paintings.